Following successful performances of two
Polish superstars, Ewa Podleś and Mariusz Kwiecień, the Seattle Opera
introduced this season Małgorzata Walewska, a fine singing actress with
a stunning mezzo-soprano. She appeared in Bela Bartók’s opera
Bluebeard’s Castle as Judith, and her performance has received
enthusiastic reviews. A group of Polish Studies supporters and opera
aficionados had a pleasure to hear Ms. Walewska and meet her at a
private reception. 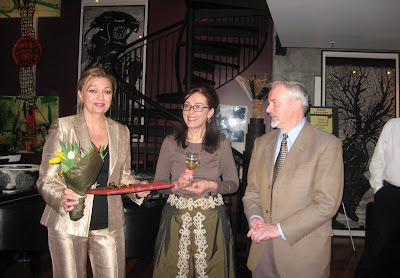 At the reception – photo Irv Eisenberg

Ewa Poraj-Kuczewska – The audience as well as critics
have left the opera house delighted with Bluebeard’s production and your
performance. What did the role of Judith – a woman who wants to know
more – mean to you?

Małgorzata Walewska – This role is an amazing
opportunity for an actor. It is not my first Judith – 10 years ago I
played this role at the National Opera in Warsaw in a production by
Janusz Kijowski who had a very interesting way of telling the Duke
Bluebeard’s story. The opera begins with Judith’s praying on the
Bluebeard’s grave. Suddenly his voice appears from somewhere and it is
a little bit like a meeting with a ghost. To show the two separated
worlds which Duke and Judith belong to, the Warsaw director took
advantage of a revolving stage, placing Bluebeard inside and Judith
outside. She opens seven secret doors which look like ice rocks covered
with silk curtains – the last one leads to Bluebeard’s world, which for
Judith is a symbolic land of the dead. It has a double meaning: when
you reveal all of life’s mysteries and know answers to all questions,
you have already found yourself on the other side. Remembering the
Warsaw staging, I was wondering what the Seattle production will be
like. And I found it absolutely fabulous, especially magical interplay
of light and color.

MW – I am a kind of
retired Carmen. For how long I can be this heroine who is in her
twenties..? But it is probably true that Carmen is more about a
personality than age. I like this role. It has been growing, maturing
with me… There is always something else what I can do with this
character. Among ten different Carmen I performed in, my favorite one
was a very modern Wrocław 2005 production (costumes like from Matrix),
focused on acting more than is usual.

EPK – We are so happy to see you
performing in Seattle. Soon another Polish artist will be back here –
Mariusz Kwiecień whom you know well…

MW – Mariusz Kwiecień is my dear
friend, we studied in a music school together. When Mariusz left Poland
for the US, he constantly called me, saying ‘Walewska, you have to come
here, Americans will love you’. I have trusted him but you have to have
a lot of guts and determination to get to America. Meanwhile I had been
quite busy in Europe. But when I was performing in Toronto, I thought
one day ‘here is a moment to go to NY, to a Metropolitan audition’. I
did it and two weeks later I got a contract…. And what a coincidence –
I have been noticed there in Samson et Delila by the Seattle Opera
director, Speight Jenkins. However, I am not sure he would have hired
me if it were not for the fact that Mariusz Kwiecień reminded him about
me; Speight Jenkins evidently takes Mariusz’s opinions seriously.

EPK – I have a feeling that more and more Polish names have succeeded in
European and American opera houses. Especially at the Metropolitan
Opera…

MW – That’s true. The best example is a last production of
Lucia di Lammermoor with Piotr Beczała (tenor) and Mariusz Kwiecień
(baritone). They have had established careers but what a spectacular
success! It is interesting: they both left Poland relatively young,
fortunately found right agents and music circles, and everything worked
perfectly. There is another Polish singer who recently made a
fascinating debut at the Met, soprano Aleksandra Kurzak. She also
staked everything on one card, left Poland for Hamburg from where she
moved into the world. And one more name: Andrzej Dober who established
his career in Italy where he is considered as a Verdi baritone – it is
hard to imagine a greater compliment. I have to say that I am one of a
few Polish singers who became known abroad, but who still live in
Poland. I have never had such a desire to stake everything on one card
and always wanted to stay in Poland where I have my family, my mother
and where I feel happiest. Actually, the world is becoming smaller and
more open – my Polish home is pretty close to the airport – and maybe it
is not so important anymore where someone lives.

EPK – Do you have a
favorite opera house, a place where you especially like to perform?

MW –
I always love to return to Warsaw, to the Polish National Opera. I have
there my audience, my parking space, it is my place. I admire the
productions of Mariusz Treliński who runs this opera house, for example,
his new The Queen of Spades or the famous Madama Butterfly, which
Placido Domingo brought to Washington. I do not feel particular desire
to perform in the greatest opera houses. The Metropolitan Opera or La
Scala give an artist recognition and prestige but also an extreme dose
of stress. When I am on a stage, I like to enjoy singing, but in the
big houses you are constantly judged and feel like you are being
examined through a magnifying glass. I am glad that I performed at the
Met and will soon sing in Covent Garden because it looks good on a
resume, but for me those are not the greatest experiences. 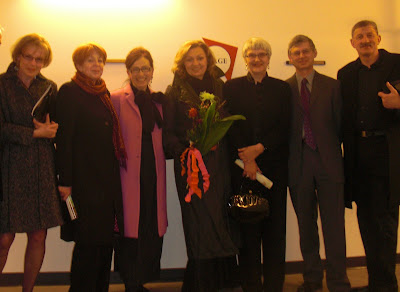 EPK –
Apparently, you chose opera not only for the music. Did you find what
you were looking for?

MW – I consider myself mostly an actress. Since
my two passions are acting and singing, and an opera is perfect blend of
them, I have found there everything that I need. I am completely
fulfilled in it, and even though I sometimes sing other kinds of music,
I am conviced that opera is my destiny.

EPK – What are your plans for
coming months? Where will you be performing?

MW – Soon another Carmen
in Warsaw. Then Il trovatore in London Covent Garden, it is very
important, so please cross your fingers. After that Aida in Athens, Il
trovatore in San Francisco, Carmen in Cracow…

EPK – Are you planning to come back to Seattle?

MW – Yes, and I am looking forward to it, since
you have here such a great acoustics, a wonderful audience and a lovely
Polish community. In January 2010, I will sing Azucena in Il Trovatore.
A year later – I hope it can be disclosed – I will return as Dulcynea
in Don Quichotte, and Don Quichotte will be played by John Relyea, my
partner from Bluebeard’s Castle and the fabulous artist.