General Mirosław Hermaszewski, who in
1978 flew aboard Soyuz 30, gave a very interesting lecture about the
history of space travel and his own experience as the first and only
Polish astronaut. The hour spent with the cosmonaut provided everybody
with rare impressions of the circumstances of space travel, the first
successes and failures when hastily prepared missions put everything at
extreme risk, the canine cosmonauts that were sent out before people and
after for special experiments, the misconceptions about life in space
and how astronaut and cosmonaut teams were finding practical solutions.
(Tomasz Seibert) 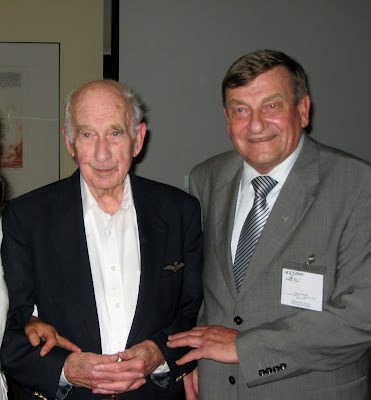 The high point of the evening was the encounter of two
space eagles: General Hermaszewski and one of the last WW II Polish
fighter pilots, Capt. Alexander Herbst.

Conscious of the fact that I was facing a General, I reported
myself giving name, rank and numbers of squadrons in which I had served.
He beamed pressing my hand hard, after all we were both from the same
Polish Air Force Academy, only he had been there twice, once as a cadet
and then as Commandant. (Alexander Herbst)

Well aware of
the history of the Polish squadrons in the R.A.F., the General was
attentive to details and incidents filling out his knowledge. Of
particular interest was the development of fighter aircraft battle
formation mastered by Polish fighter pilots and used later by English
and American squadrons. (Alexander Herbst) 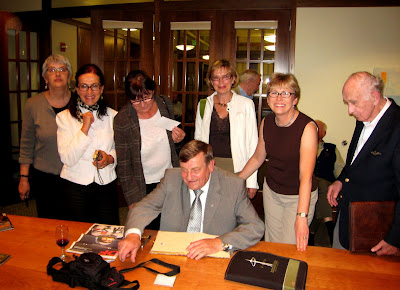 General Mirosław Hermaszewski with guests and the Committee

Much of the story of space flight
as related by him was known to me, but the General added details of
which I was not aware. What struck me was how even handed he was in
describing the achievements of both the Americans and Russians in the
Space Program. There seems to be an esprit de corpse erasing national
differences among these “birds of a feather”, which I found most
appealing. (Alexander Herbst)